"Holiness unto The Lord" 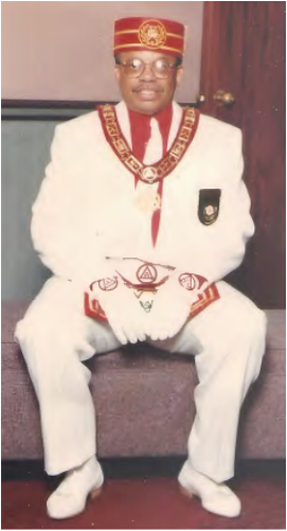 Rev. Joseph T. Thornton
​Past Most Excellent Grand High Priest
​
Reverend Joseph Thomas Thornton was born in Brundidge, Alabama to the late Carolyn Thornton and the late Lamar Harris. Accepting Christ at an early age, he was baptized at the County Line Baptist Church in Brundidge. He was the valedictorian of his graduating class st Stuart Training School, in Stuart, Florida. He attended college at Florida A & M University and graduated with honors from the Northeastern State University, Tahlequah, Oklahoma. The honorary degree of Doctor of Humane Letters was conferred on him by Liberty Baptist College in 1985.

He married the former Elsie Mae Bell of Stuart, Florida. This 41-year union was blessed with seven children: Joseph Richard, Thomas David, Alfonso Eric, Gwendolyn Lavette, Sabrina Faye, Latonia Lynn, and Rodney Maurice. He also was the proud grandfather of 17 grandchildren. Additionally, he had many other family members and close friends.

Reverend Thornton completed a distingushed military career 28 years, 10 months and 28 days continuous service culminating with his retirement from active duty in April 1985. His service was divided between the U.S. Army and the U.S. Air Force. He entered the Army in April 1956 with the following assignments: Baumholder, W. Germany; Ft Riley, KS; Ft Carson,CO; Ft Polk, LA and Ft Bragg, NC. His Air Force assignments were: McCoy AFB, Florida; Republic of Vietnam; Kadena AB, Okinawa; Rhein-Main AB, W. Germany; Lindsey AS, W. Germany, and Keesler AFB, Mississippi. Serving with valor, he was awarded the Bronze Star Medal for service in the Republic of Vietnam. during his military career he also received numerous awards, honors and medals for his many contributions to the armed services.

His Masonic accomplishedments, affiliations, and contributions were numerous and significant. He was raised to the sublime degree of a Master Mason in Willie H. Dixon Military Lodge # 143, Wiesbaden, W. Germany. He was elevated to the 32nd Degree of the Ancient and Accepted Scottish Rite (AASR) of Freemasonry during March 1975 in Prince Hall Military Consistory # 304, in Frankfurt, W. Germany. He was created in the shrine in Aswan Temple # 115. Frankfurt, W. Germany during that same year. He was elevated to the 33rd and last Degree of AASR Freemasonry during the United Supreme Council Session held in Orlando, FL on October 13, 1980. Positions held during his masonic travels are as follows: Past Study Club President Wiesbaden, W. Germany, Past Junior and Senior Warden and Past Master of Willie H. Dixon Military Lodge #143; Past Patron of Blanche M. Bruner Chapter # 17, Order of the Eastern Star Wiesbaden, W. Germany; Past Keeper of the seals and Archives for Prince Hall Military Consistory# 304, Frankfurt, W. Germany; Past Potentate of Aswan Temple #115, Frankfurt, W. Germany; Past Excellent High Priest of Joseph P. Broadnax Chapter #40 Holy Royal Arch Masons, Wiesbaden, W Germany; Past Eminent Commander of John D. Henry Commandery #2, Wiesbaden, W. Germany; District Grand Worthy Joshua, Heroines of Jericho for District 8, Western Europe, Past Commander-in-Chief of San Hedrin Consistory #36, Muskogee, OK and Past Royal Advisor of Mary Lou Whitby Guild #2, Heroines of the Templar Crusade, Muskogee, Oklahoma. Reverend Thornton ascended to the Throne of the Most Excellent Grand High Priest Holy Royal Arch Masons during the Grand Convocation of 1986 and served in that capacity until his death in October 1996.

A Resolution requesting the Grand Chapter be named in his honor was submitted and approved during the Grand Convocation of 1997. Reverend Thornton served in various lay positions in the church and felt his call to the ministry in October 1986. He was licensed as a minister on March 12, 1989 after receiving ministerial training at Antioch Baptist Church, in Muskogee, OK. He was ordained on October 28, 1990, installed as pastor of Friendly First Baptist Church of Rentiesville, Oklahoma in November 1990, and served as their pastor until his death.

Reverend Thornton was laid to rest at his birthplace of Brundidge, AL on October 16, 1996. As our ancient brothers rebuilt the temple, our late Most Excellent Grand High Priest, Reverend Thornton , rebuilt Royal Arch Masonry in the Jurisdiction of Oklahoma. He left a legacy, which we are morally obligated to maintain. May he rest-in-peace and may we continue to promote his legacy.